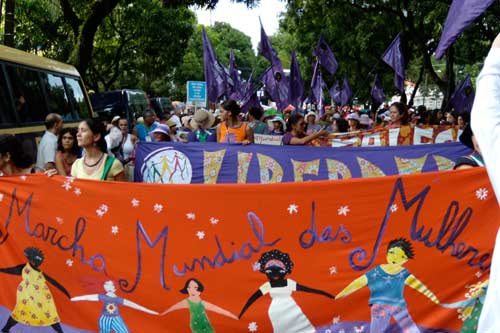 The World Social Forum starts this Tuesday, in Belém do Pará, close to the Amazon Rain Forest. More than one hundred thousand participants are expected, to attend more than two thousand panels and discussion seminars, as well as over a thousand journalists from all over the world.

Everything seems overwhelming for this city: people are staying in boats and private homes, on conditions far bellow those imagined when they booked their accommodation months ago, thousands of kilometers away. Young people who have opted for camping must face the pouring rain, which comes in the short but torrential spells typical of tropical areas. The Transform delegation, which I'm a member of, is lodged in the comfortable abode of a religious order active in popular education, about fifty kilometers away from the city.

Locals say the city looks different this week: security was clearly increased and the places where the forum is taking place, as well as the city center and the main access routes, are under surveillance. Road blocks for cars and even buses are common, so that the passengers can be searched. The universities where most of the WFS is taking place are on the outskirts of Belém, in an area made of poor and substandard housing, where insecurity and police patrols are usually hand in hand. It is rather uncommon to meet anyone who speaks English ou French in shops and restaurants, at a time when the town is crowded with people from all over the world. Every time I take a picture, even inside a public bus, someone reminds me of how dangerous it is to display a camera in public.

On the streets of Belém one can find push carts attached to skinny donkeys or even men, carrying fruit, tyres, cardboard boxes or crates with empty bottles. At night, many streets are taken over by female, male and transgender prostitutes and the taxis avoid stopping at red lights. Peoples bellies are swollen because of malnutrition, based on plenty of rice, pasta, beans and cassava flour.

For European standards, even for those of Portugal, fried (and quite fresh) fish, assorted wonderful fruits, or even the typical and absolutely delicious duck in Tupuci sauce, are rather cheap. Albeit its poverty, the people of Belém express their happiness for having so many visitors in town, regardless of the obvious communication difficulties.

Even before the WSF as such starts, there are plenty of things going on in town. The Transform network is one of the organizations behind the Word Forum for Science and Democracy, which aims at launching a project to be perhaps included in the next World Social Forum. I myself attended a debate on «Emerging Ways in the Struggle for the Democratisation of Science», where it was discussed how capital is taking charge of scientific evolution, by controlling the product of its research (trademark registering, legislation on intellectual property) and the means for its accomplishment (by means of «donations» or funding of public research centers): in terms of cognitive capital, science has now the power of direct intervention in creating value and innovation has replaced capital reproduction.

But it must also be said that innovation has paved the way for new types of activism and diversity in researching can be a weapon against knowledge control. Programmes for mass adult education carried out in India throughout the twentieth century, based on models of scientific research aimed at the concrete problems of the population and valuing traditional knowledge (in areas such as food, farming, or water management, for instance), are an effectual way forward for science to address local needs. Amazonian shamans have also come up with new models of research, in which science adds up knowledge to that already produced by indigenous peoples,

Such approach rejects a positivist categorization, putting forward the need to study socio-diversity against bio-diversity (which neglects social relations) and refuses the notion of «participatism», for it invokes traditional knowledge to contribute partially to science, whereas the task of scientific research must rather be to reinforce the knowledge the indigenous peoples of Amazonia produce about their own living conditions.